Part of living in a new country is partaking in and experiencing that country’s holidays and celebrations.  As an American currently living in Ireland, I was excited about celebrating Saint Patrick’s Day in Ireland. As someone with Irish heritage, I have always celebrated my “Irishness” on Saint Patrick’s Day but here, it is a national holiday. In Cork, they have a parade every year. I wholly expected all of the floats and groups in the parade to be completely decked out in Irish gear. I was pleasantly surprised.  There was a plethora of ethnic groups celebrating in the parade. Nigerian, Asian, Mexican, Indian; they all had spots in the parade celebrating their nationality and celebrating that they live in Ireland.  The inclusion of these minority groups in a festival parade that celebrates Irish heritage is the most refreshing thing to see when you live in a predominately white catholic country. 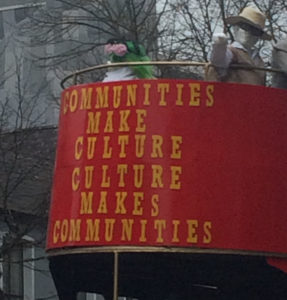 It shows to me that this holiday is not just about dressing up in green and drinking beer. It is about inclusiveness; celebrating the freedom of your current home wherever you are from.  It is no longer a holiday that is contained strictly to the Irish.  A large part of this is due to the mass Irish diaspora.  Many men, women, and children left Ireland seeking a better life in new countries.  Their reasons were lack of jobs, lack of food, or lack of safety due to the wars that were taking place in Ireland.  Does this sound at all familiar?

Enda Kenny, the Irish Prime Minister, spoke at the White House on Saint Patrick’s Day. He spoke on Irish immigration and the history of hard working Irish immigrants in the United States. In his speech, he relayed the feelings of the Irish who have made their home in America through a quote by JFK:

Because of immigration many people, who may not even have Irish heritage, celebrate this Irish holiday together. Many people who have Irish heritage are proud to claim their ancestry. Why is this attitude about past immigration so different from the attitudes people have on current immigration? People are fleeing to other countries from lack of safety and lack of food. In a new country, where the most basic needs of food and safety are able to be met, refugees and asylum seekers are able to give back to the community that welcomed them with open arms.

The Irish did have to battle a lot of racism when they first fled to the United States, but shouldn’t we have learned from this by now? Shouldn’t we have realized that immigrants provide huge boosts to communities and the economy? I challenge you who are reading this, to think about your ancestry. Do you talk about what countries your family members immigrated from? They most likely came to the United States seeking some sort of betterment in their lives. What would have happened if they were denied that based on their race or religion? The United States was built on the lives of immigrants. Our attitude towards immigrants should not based our failure to see the similarities between ourselves and others.